Harry Potter and the Tonal Analysis

Harry Potter and the Sorcerer’s Stone has, roughly, 5746 sentences, spread out over 17 chapters. I know this because I have recently tried making a new style of English dataset for the CORGIS project. Previously, we had attempted to create datasets for English majors by analyzing a corpus of books and computing some statistics (difficulty, sentiment analysis, etc.). This new approach would look at a single book, which actually gives us the ability to compute some new statistics.

One of these statistics is particularly interesting: Tone Analysis using BlueMix from IBM Watson. Essentially, this service allows you to get a variety of tonal information for a sequence of sentences. For instance, you can get the estimated “Sad”ness of a sentence as a decimal 0..1 value, along with a number for “Joy”, “Fear”, “Anger”, and “Disgust”.

So what happens when you put in the text of the first Harry Potter book? 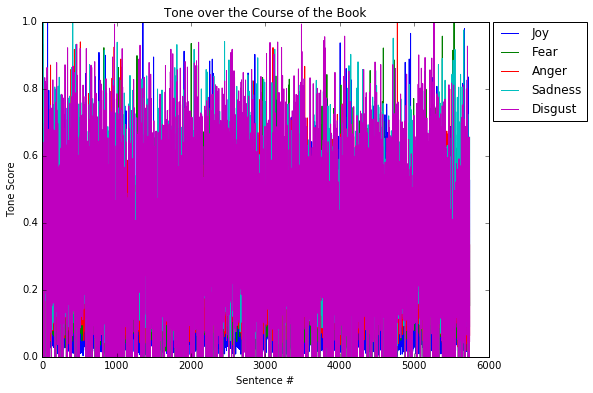 Unfortunately, that’s not particularly helpful. The results of tone analysis fluctuates so much over just a few sentences that we end up with a mess of lines. I believe that the only reason its purple is because that was the last tone drawn.

It is fairly easy to create a Rolling Average with Pandas+Scipy+Numpy. This helps tease out a more useful graph, especially when the tones are standardized. 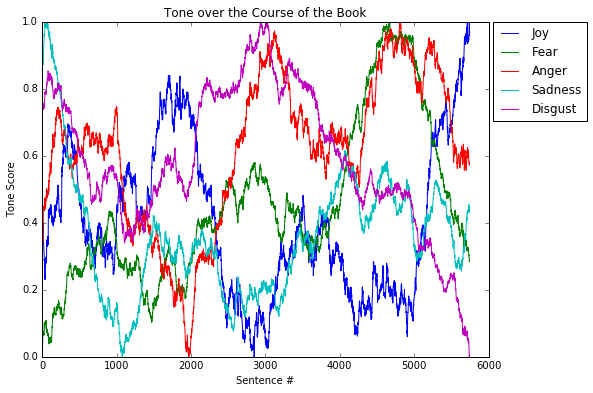 Suddenly, we can actually see trends! And those trends can be matched up against points in the book (Spoilers!):

Now, it’s not a perfect match up, and there are a lot of other trends to explain here. But I did think it was interesting to see how we could pair up important events with peaks and troughs. Unfortunately, all the postprocessing I had to do makes this kind of analysis out of the reach of most of our students without some more help. I have to carefully think about how to make this kind of data available in such a way that its still useful. Dataset creation is tricky business!