In the 2019 SIGCSE paper about the Python Sneks curriculum, two experiments were briefly described. These experiments followed a model of Design-Based Research*.

Educational research is frequently confounded by the rapidly changing target space and variability between semesters, frustrating efforts to control populations for experimental validity. We share the beliefs suggested by Nelson and Ko [21], that the quest for unarguably valid experimental results is a detriment to progress in perfecting designs within computing education. The Sneks curriculum is ultimately a design artifact, and so frequently decisions were made that could affect the sanctity of our experiments. We allowed modifications in a systematic way that would contribute to the research space, while acknowledging the dynamic nature of educational settings. Therefore, we approach our modifications from a Action Design Research (ADR) perspective. When ADR is used in an educational setting, the result is similar to Instructional Design: an iterative cycle of identifying problems in existing curricula, implementing changes, and observing the impact. Therefore, the interventions presented in this section should be taken with the caveat that the studies are static-group comparison designs, and understood for their limitations.

*Although the original paper uses the term Action Design Research, it might be more accurate to use the term Design-Based Research.

On this page, I have attempted to describe the experiments with more depth than we could fit in the original 6 pages. Due to time concerns, they were not described in depth in the SIGCSE presentation. Although hardly ideal, we felt that this was a better compromise than letting the results not be published.

Note: Both experiments were run by undergraduate Computer Science majors completing Independent Studies with Dr. Bart. We hope you will take this under consideration when evaluating the results. We do not offer conclusive experimental results, but are largely sharing the experiences of conducting these interventions. Nothing is proven with our work, but again we felt it was better to share our data as much as possible in the venues available to us, rather than just letting that data hide away in a folder. Remember, our goals were to improve our course, not to verify some fundamental truths.

The first experiment was conducted by Michael Friend.

Problem: Students struggle with difficult programming problems, spending a fair amount of time/energy and requiring external help to overcome them.

Intervention: In the second course offering, 8 problems were selected as the hardest (based on the metric that it took students longer than average) out of the 188 that we were using that semester. Worked Examples were created for each problem and made available to students in the problem prompt (via a short message and a link, to the effect of “Here is an example that may help”). The Worked Examples were developed by Michael and edited by Dr. Bart, but no further tests or iterations were conducted on them before they were presented to students with only limited explanation.

Students had infinite tries over two weeks for each assignment. They completed the problems in the BlockPy programming environment. Worked Examples were provided through a separate HTML page that tracked user behavior.

Examples: Here are some examples of our Worked Examples.

64% of students found the Worked examples helpful, with only 18% explicitly disagreeing. 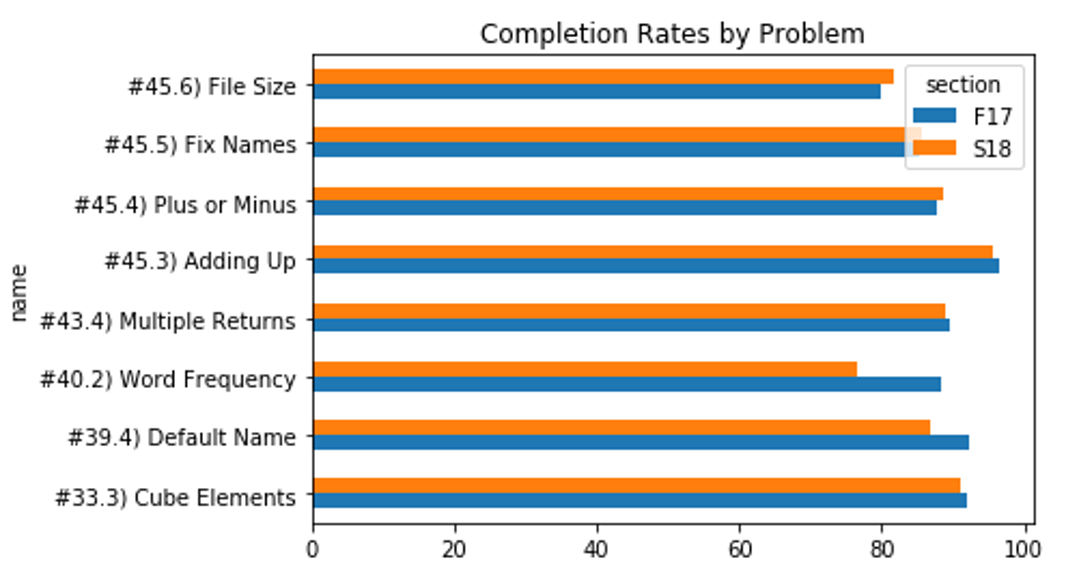 Measured usage of WE varied widely by problem, with an average around 50% of students at least opening them.

Students who used WEs actually completed the problem in more runs/time than those that didn’t.

Focusing on the values for S18 students with no prior experience, we see those that used the WE actually took over twice the time and runs as those who didn’t. A Cohen’s D test gives a large effect size for both measures (p=0.8, p=1.1).

Conclusion: The Worked Examples did not seem to lead to improvement on completion rate, although students did report finding them helpful.

Raw Data: Some semi-processed results are available in some Jupyter Notebooks and a poster on our GitHub.

The second experiment was conducted by Allie Sarver.

Problem: Students report that they do not feel prepared to begin a large-scale project. This was particularly problematic with the Final course project, where a number of students reported on the final course survey that they didn’t know how to get started (first course offering, Fall 2017). Since new projects of the same difficulty level (albeit earlier content) were being added in the second offering (Spring 2018), the course staff was concerned that the sense of unpreparedness would hit students early on at a potentially delicate time in the course.

Theory: Micro-classes group students within a large lecture hall, previously shown to foster community. In general, techniques such as Cooperative Learning and Peer Instruction have shown to have a powerful impact on students pass rates in computing.

Hypothesis: If students are given structure to form groups naturally, the enhanced community will contribute to their preparedness.

Intervention: On the first class period after Project 2 began, a special intervention was conducted.

1) The instructor gave an overview of the project in a lecture hall of 200+ students. 2) The class was divided into 8 sections using colored pieces of constrution paper, each explicitly managed by a designated TA. 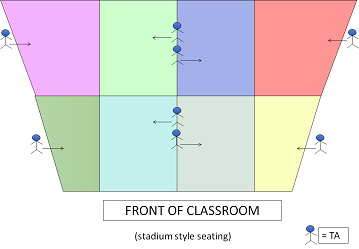 3) Within each section, students were encouraged to organically form small groups (pairs and triples), with TAs told to help groups and not individuals. 4) Students then worked together to answer questions on a paper worksheet about the upcoming project. 5) Afterwards, students were prompted to begin working on the project together, with an emphasis on using student community to solve any problems they may come upon. 6) The next class period was also dedicated class time to work on the project in small groups.

Data Collection: After two classes of project work, students took a Likert-style survey to assess their readiness to begin the project, their sense of classroom community, and if their sense of community was helpful in solving problems. This same survey was administered after the final project in the previous semester.

Results: Students reported a significantly (as evaluated by a Mann-Whitney U test) increased sense of community relative to the prior semester, but did not feel significantly more prepared to begin the project. There was a significant but moderate Spearman Rank Correlation of .41 between these metrics. 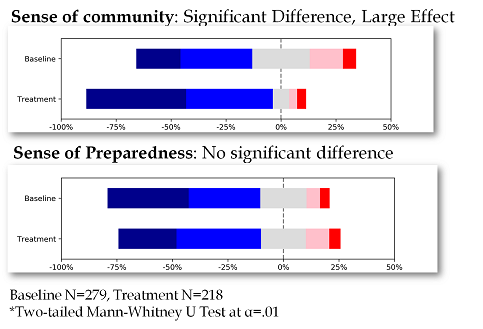 Conclusions: Although working with others did make a majority of students feel more prepared to start the project, the increased sense of community did not seem to help students feel more prepared to start their project. Some limited analysis of the qualitative data suggests students might have been naturally inclined to seek help of TAs rather than each other.

Limitations: Data was never collected directly on whether students struggled to get started with each project, and the surveys were administered between different semesters for different projects. Finally, a possible limitation of student-selected peer groups is that novices working with novices may not feel that they have any new information, and will still need additional assistance. It’s also possible that some elements of the project may have been flawed and unnecessarily difficult; for example, both projects had fairly strict output checking which may have been confusing for students still learning about strings.

Some semi-processed results are available in a Jupyter Notebook on our GitHub.